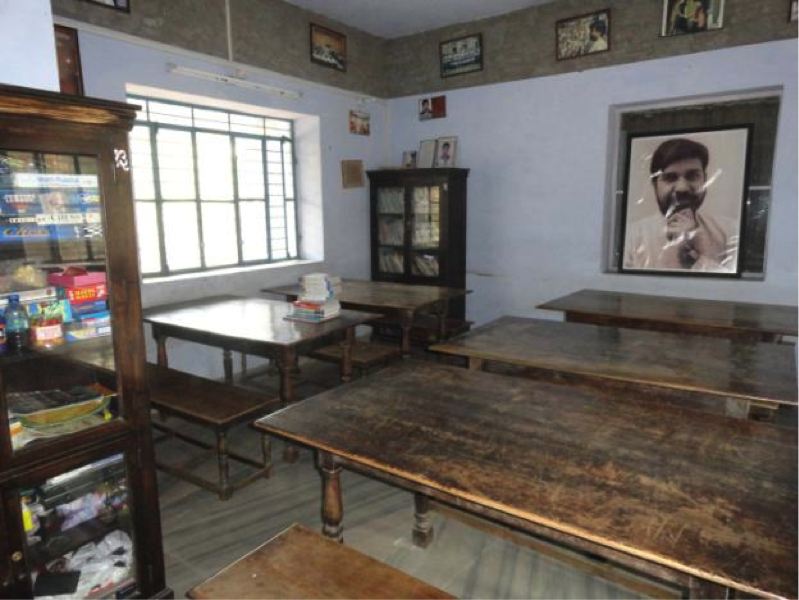 Before we present this report, Asha for Education offers its heartfelt Congratulations to Kailash Satyarthiji on being awarded the Nobel Peace Prize. He is truly an inspirational figure who has undertaken such a momentous cause that this recognition is but apt. On this occasion we encourage you to read more about Bachpan Bachao Andolan, the organization started by Satyarthiji, and understand the importance of rescuing children from servitude.
One of the key aspects of rescuing children from bonded labour is to provide rehabilitation and a path towards a better life. Bal Ashram is a rehabilitation center where rescued child laborers receive basic education and vocational training to help them transition into society as well rounded individuals when they grow up.  Bal Ashram, run by Smt. Sumedha Kailash, has been a long standing project partner of Asha and the Dallas chapter of Asha for Education has been supporting the school since 2006. Ravi Kandikonda, the project steward, visited Bal Ashram Trust earlier this year and had the good fortune of interacting with Sumedhaji and Kailashji. Here is an edited version of the report:
Site visit to Bal Ashram Trust.
Conducted by Ravi Kandikonda on Feb 23rd 2014
Bal Ashram Trust is a transitory rehab center established in 1998 by Bachapan Bachao Andolan, which is a well-known grassroots organization that aims to eliminate child labor as we know it today. The Ashram offers bridge classes and vocational training to former and existing children of the ashram. Their main activities are to give formal education to children rescued from child labor, bring the kids up to par with age-appropriate education and impart vocational training. They also help the children form Bal Mitra Grams (BMG) that essentially are modeled to be child-friendly villages or in other words reduce if not eliminate child labor. They also conduct many awareness camps in and around the area to sensitize the community regarding the vicious cycle of poverty-child-labor-exploitation.
The project is located in the town of Viratnagar, which lies in the Aravalli mountain range between the major cities of Jaipur and Alwar in Rajasthan. My visit (along with my wife Bala) began with a taxi ride from Jaipur along NH 8 early in the morning as we were told it was about one and a half hour drive. We passed through the town center of Viratnagar, which was just a stretch of road with vegetable market and other general stores on either side. We reached the Ashram around 9:15am and were welcomed by Adesh-ji. The Ashram itself seemed like a sanctuary for anyone wanting to get away from hustle bustle of city life but its more serious role that of providing shelter and bridge school became slowly apparent. It had a small front office, boarding rooms for the kids in the far back, a prayer room, a library, a dining room or ‘mess’ as it is referred to in India. The kids were near the prayer room while we were welcomed and told that Kailash-ji and Sumedha-ji were only a few minutes away from reaching the Ashram. I had spoken with Sumedha-ji the previous day and she had mentioned they would be arriving at the Ashram from New Delhi. As soon as it was found that the car they were coming was just a couple of minutes away, the kids in the Ashram were all super excited and started shouting happy slogans welcoming them. As the car came inside and they stepped out, each and every kid took blessings from Kailash-ji and Sumedha-ji and only then we got to actually meet them. We spent some time talking about the Ashram and got to hear about the international tour that Kailash-ji had just returned from. He was a guest speaker in the Parliaments of four countries, which lets him take his message of eradicating child labor around the world. He is the founder of Global March against Child Labor and has received numerous awards and recognitions for his work to free children of child labor. In 2009 he was given the ‘Defenders of Democracy’ award by the international non-profit network ‘Parliamentarians for Global Action’.
Meanwhile, the children had all settled down near the prayer room sitting in organized rows and were ready to their visitors, my wife and I. As we entered the area, a couple of young girls came forward and applied the traditional ‘tilak’ to our foreheads and given flower garlands. We were seated in two chairs and then started conversing with the children. We asked them to stand up turn by turn, introduce themselves and tell us where they are from and what they want to become they grow up. The children were excited in telling us what they wanted to become and some of the professions we heard were like police, doctor, painter, electrician etc. At one time, it got a bit emotional when one of the boys said he used to beg on the streets before he was rescued by the Ashram. It was heartening to see where he was today compared where he was before in his life. We went around the entire group of children and then introduced ourselves. It was time then to play some cricket with them and quick game of carrom board with the youngest children. The playground was surrounded by many trees. We were given a tour of the library, the hostel rooms and they seemed clean and well maintained. The children were being given very good health and hygiene training as part of their bridge course. Asha Dallas supported the construction of make-shift classrooms for the children of Banjara community. The chapter also funded a borewell that helped one community save lot of time that was spent collecting water for daily use. I had time to visit two such communities which were slightly away from the Ashram. Adesh-ji accompanied us to the first community was a group of huts (pictures shown at the end of the report). The children were prepped regarding our arrival and they were sitting in the classroom reading their notebooks and talking to each other. When we arrived here, we were again greeted with some more ‘tilak’ and flowers. Apparently that is how they welcome all of their guests. We spoke at length with the teacher who was available for the visit. He is the sole teacher who lives nearby and helps with teaching the kids basic reading, writing and speaking. The make shift classroom was simply a four pillared structure with a thatched roof and no walls.  I clearly saw a need to put a wall around the structure that gives more protection from the local wild animals (goats, dogs etc) and also from rain and hot winds during summer. We went to the second school where we had helped install a borewell. I actually pumped some water up and drank from the bore, which tasted very nice. I was so happy to see a direct benefit that the Dallas chapter was able to provide to the community. The elders in the community (mostly mothers and grand mothers) came forward to speak to us thanking us for the borewell and asking us to fund the construction of a wall around the make-shift school.
We got back to the Ashram just in time for some hot lunch that was prepared in the Ashram for the children and the visitors. We had a very nice chat with Kailash-ji, Sumedha-ji and a visiting intern from Britain unrelated to Asha. We were then given a very warm send off to the airport and we got back to Hyderabad with ton of memories and also of course with a sense of urgency to help the Banjara community. I strongly recommend the Dallas chapter and any other interested Asha chapters to fund these Banjara schools that cater to first generation learners.