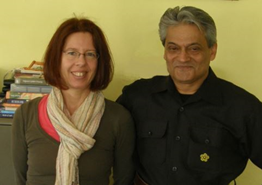 For many years I had been participating in Asha Zurich’s Charity As Your Hobby (CAYH) program when I decided that donating was too anonymous and remote, and that doing something actively for the cause in addition would be more satisfactory. So I started going to the monthly meetings and volunteering where needed. Then, last spring, I more or less stumbled into the next stage.

For this year’s trip to India, I had chosen West Bengal. I had drafted an itinerary but needed to fill some gaps, so I gladly accepted the suggestion to visit the Makaibari Tea Estate from a Goa based travel agent whom I often turn to for assistance. Contact was made and I booked a homestay at Makaibari. A picture formed in my mind of me sitting at a peaceful spot outside with a view of sloped tea gardens, reading a book and sipping tea. But things would turn out more interesting than that.
When I booked a tea tasting session, I was informed that the owner of the estate would be there and that I would have the opportunity to meet him. I had no idea what was awaiting me. After having had a cup of tea at the Makaibari offices, I was greeted by Rajah Banerjee, the fourth generation owner of the estate, and we sat down in his office. During the conversation, I realised that the Makaibari Tea Estate really is a very special and unique enterprise. I was quite impressed by this energetic and charismatic man who seemed to have found his vocation and followed it unconditionally. I was also very surprised to learn that Rajah was a follower of Rudolf Steiner (Demeter) and introduced his bio-dynamic methods as early as the 1970’s. In addition, Makaibari follows a form of integrated forest management called permaculture, where the tea bush is part of a multi-tier system of trees and plants of a sub-tropical rain forest. 70% of the entire area is under forest cover.
I noticed that Rajah had an indubitable streak of altruism, which resulted in me being struck by an idea out of the blue. I am usually not the most extrovert of people, but I could not help blurting it out immediately. I asked him whether he would be interested in co-operating with Asha for Education. He requested some more information, considered for a moment and agreed. Straight question – straight reply. I was flabbergasted and at the same time thrilled about this new project which was about to evolve.
Since then I have sold the delicious Makaibari tea to colleagues and friends and at the market. I have also made contact with restaurants and tea boutiques and received some very promising responses. It is a lot of work and requires persistence and patience, but it is also great fun to try and build something up which will hopefully help provide some steady income to the cause of Asha for Education. The next exciting project is publishing the German version of the book “The Rajah of Darjeeling Organic Tea” for sale through Asha. It is currently being translated. The Asha-Makaibari partnership shows two things:
Doris Hofer, volunteer for Asha Zurich
www.teafairy.ch
About Us
Asha for Education is a fully volunteer-run 501(c)(3) non-profit with 50+ chapters around the world whose mission is to catalyze socio-economic change in India through the education of underprivileged children. Click here for more details about us.
Our Projects
We work with over 200 projects spread across the length and breadth of India. The projects deal with educational issues from pre-primary schooling to professional education in locations from urban slums to isolated rural areas. Click here to learn more.
How can YOU help?
You can help us in our mission in a variety of ways. You can join a local chapter, get involved with projects in India at an intimate level with the Asha Stars program, help us with our fundraising efforts, visit a project in India, intern with us or our project partners or Donate! Click here to learn more.