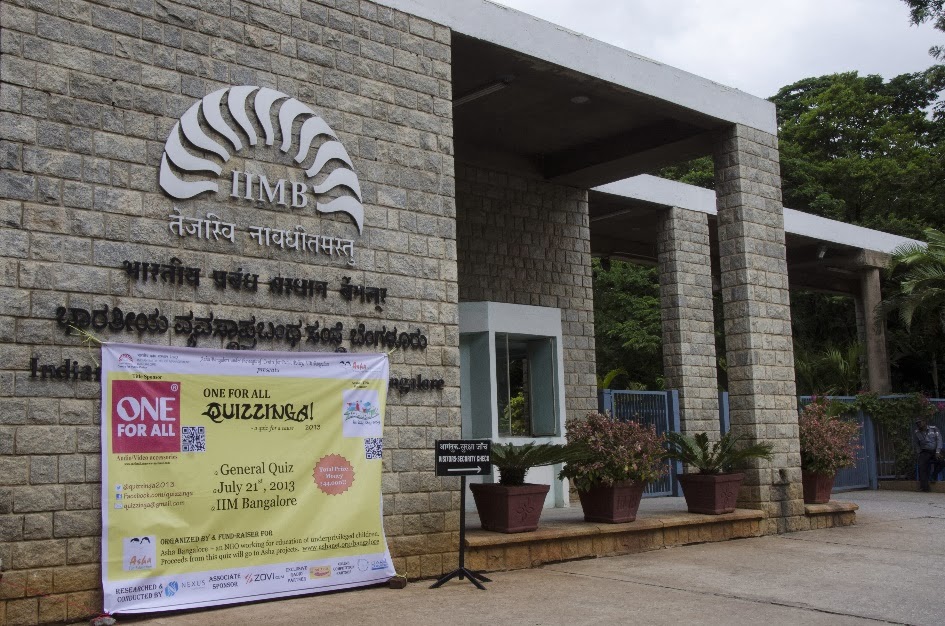 Asha Bangalore organized Quizzinga! 2013, its annual fund-raiser general quiz, at the Indian Institute of Management (IIM) Bangalore on July 21st, 2013. Quizzinga! was first organized in 2012, drawing inspiration from the ACE quiz (Asha for Child Education) that Asha Hyderabad has been organizing in Hyderabad for several years now.
The first edition of Quizzinga! turned out to be a moderate success with top quizzers in the region participating. Asha Bangalore just about recovered the expenses on the event. The big win was that a brand was created that got the recognition of quizzers across the region. Building on that, Quizzinga! 2013 saw greater success, raising ~ Rs 70,000 after all expenses through a combination of sponsorships and entry fees for contesting teams. We had more teams participating (~35), more and better sponsors and better publicity and outreach efforts. We offered a total prize money of Rs 44,000 including audience prizes. IIM Bangalore supported the event kindheartedly by letting us use their auditorium at no cost. Quizzinga! also owes its success to its quiz-masters – Team Nexus, a trio of hard core quizzers who are very well known in quizzing circles and greatly helped in bringing top quizzers to the quiz.

Quizzinga! 2013 also had a pleasant surprise to add to it its kitty in the form of a donation of ~ Rs 1,00,000 from the winning team of the National finals of a prestigious quiz competition called Tata Crucible. The Tata group required the winning team to donate a part of their prize money to an NGO of their choice and we are thankful that they chose Asha Bangalore and Asha Hyderabad. This team was a participant in the first edition of Quizzinga! It goes to show the level of quizzing and spirit that was showcased!
The funds raised have gone into Asha Bangalore’s general funds and will be utilized to support our projects on need basis. As the event grows in popularity, we are confident that it will serve as a great platform to spread awareness about Asha and the causes it supports.

Quizzinga! is now looking to up the ante in 2014 with more reach, more sponsors and more impact. As with any event, we have identified our areas of improvement and will be looking to attack them come 2014. Asha Bangalore is a small team and we are happy to have anyone interested join us in organizing Quizzinga! In 2014 and beyond. Feel free to reach out to us on quizzinga@gmail.com or bangalore@ashanet.org