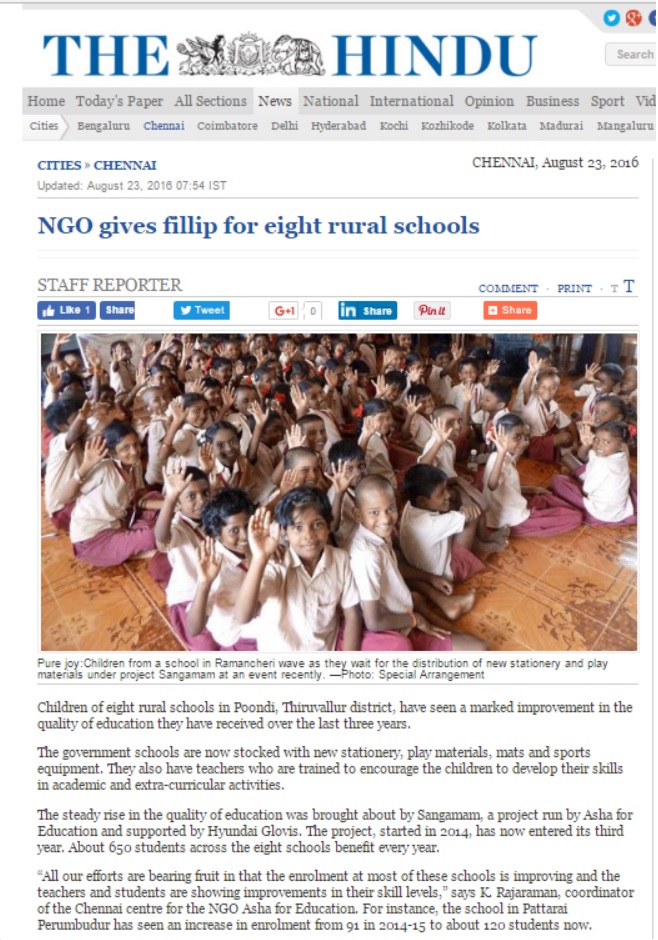 Asha for Education, Chennai’s project Sangamam was featured in the Indian national daily ‘The Hindu’ on August 23rd, 2016. See the full article here. An excerpt follows.

Children of eight rural schools in Poondi, Thiruvallur district, have seen a marked improvement in the quality of education they have received over the last three years.

The government schools are now stocked with new stationery, play materials, mats and sports equipment. They also have teachers who are trained to encourage the children to develop their skills in academic and extra-curricular activities.

The steady rise in the quality of education was brought about by Sangamam, a project run by Asha for Education and supported by Hyundai Glovis. The project, started in 2014, has now entered its third year. About 650 students across the eight schools benefit every year.

“All our efforts are bearing fruit in that the enrolment at most of these schools is improving and the teachers and students are showing improvements in their skill levels,” says K. Rajaraman, coordinator of the Chennai centre for the NGO Asha for Education. For instance, the school in Pattarai Perumbudur has seen an increase in enrolment from 91 in 2014-15 to about 120 students now.

Recently, volunteers visited all the eight schools to distribute materials that the children would need for the school year. Health kits, footwear and schoolbags were part of the materials distributed.

In order to boost the teacher strength sanctioned by the government in these schools, the project has made arrangements for an additional 10 teachers and two Computer Science teachers. Building a kitchen shed is also a part of the plan. To volunteer or learn more about the project, visit www.ashanet.org/chennai.