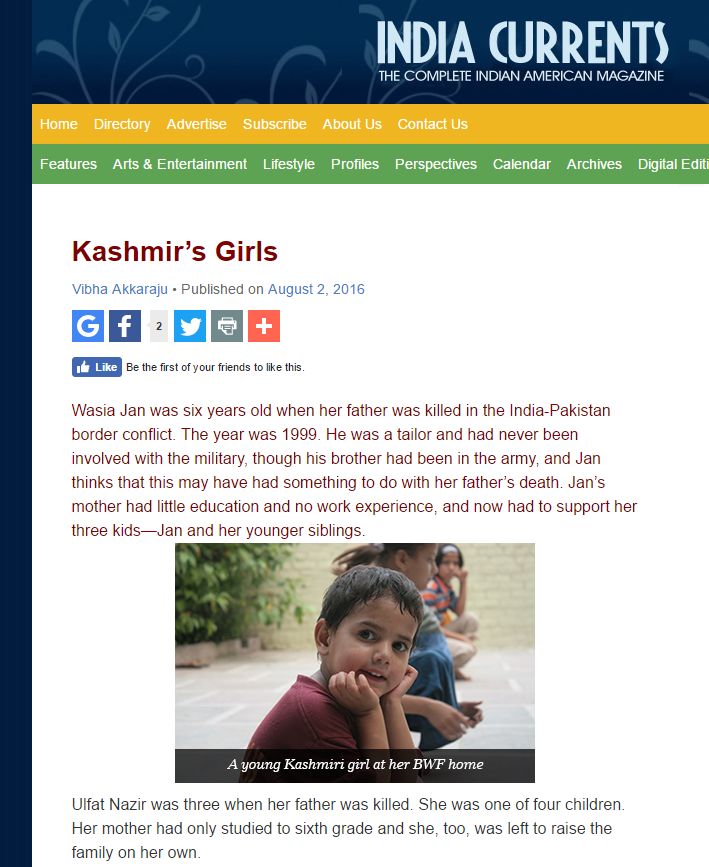 Asha’s project partner – Borderless World Foundation – was featured in the August edition of India Currents Magazine. See here for the full story. A short excerpt is below.

By an estimate of the non-profit Save the Children, in 2014 there were 215,000 orphans in the Jammu-Kashmir area, 37% of whom had lost either their father or both their parents to the terrorism and chaos that drags on in that area. The conflict in the oft-forgotten reaches of India and Pakistan has raged on since 1947—always simmering, sometimes boiling over—creating hundreds of orphans even during the quieter years.

Kadam started the organization with a home for four girls. The children were young—two-and-a-half to five years of age. He lived in the home with them, helping to feed and bathe them, taking them to the hospital, and taking care of their daily needs. But that was just a drop in the sea of need. So he took in more kids. And more. Today, BWF houses 250 Muslim and Hindu girls in four rental homes. As the children have grown, Kadam no longer lives with the children, instead focusing on securing schooling for them, helping them develop careers, even arranging marriages for some older ones. He is also hoping to build homes instead of renting, so as to minimize instability due to home relocations.

Asha for Education, for example, a philanthropic organization based in the Bay Area, has been supporting BWF since 2003. Reshu Jain, a volunteer with Asha’s Silicon Valley chapter, points out that BWF’s aim is to re-seed the Kashmir valley with the fruits of the girls’ education and training.

“In the Kashmir area, there are no really good colleges, so for colleges, they’ve been going to Pune, Delhi, and there some of the girls learned to use the machines to make the sanitary napkins,” Jain said.

They developed a business plan for setting up a sanitary-napkin manufacturing plant in Srinagar, entered it into a contest, won a grant, and returned home to set up their business.

Jain cites the example of one of the girls Kadam rescued, and later arranged a marriage for, who is now the elected sarpanch of her village, though she is only in her mid twenties: “… it’s very important that they not leave Kashmir valley, so they work in their native area, so that other kids get the same chance that these girls got. Be self-sufficient, take care of themselves, be independent and productive.”

Read the full article here, on the India currents website.