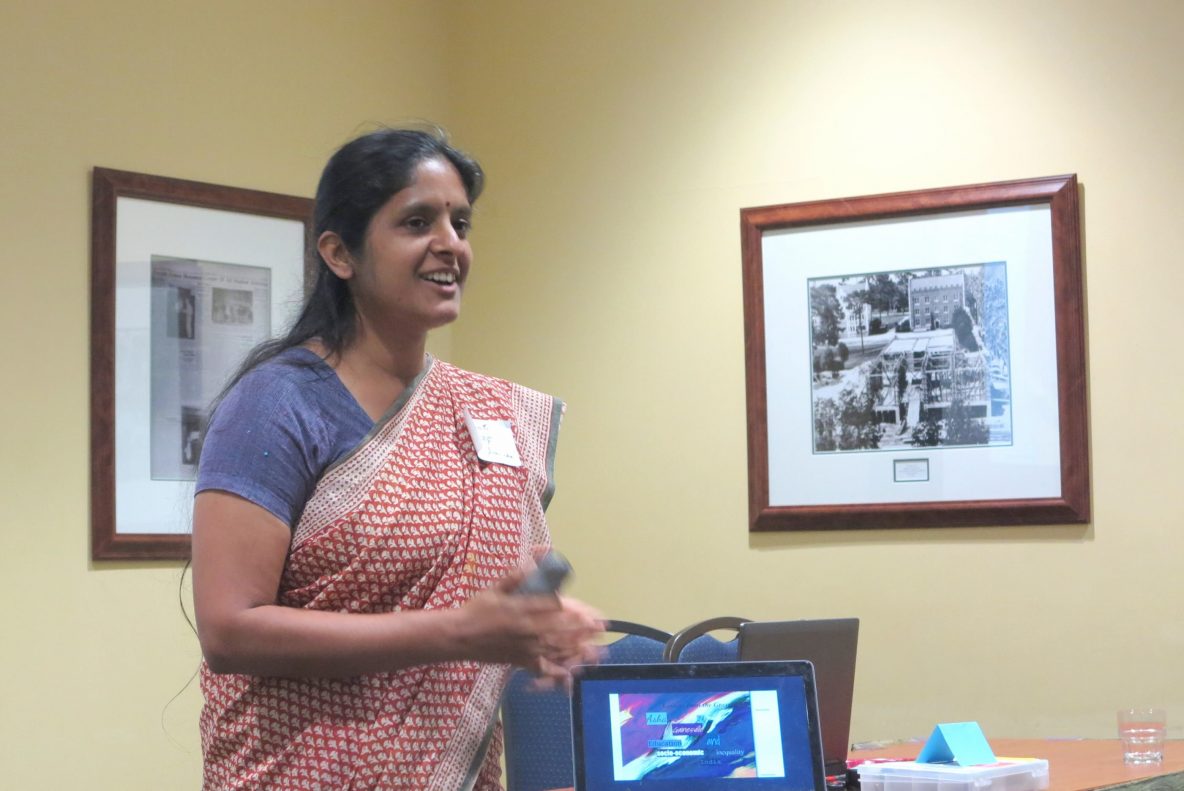 Aravinda is a Development Coordinator at AID and addressed Asha volunteers at the Asha-24 conference at Gainesville, University of Florida. Other posts about the conference are here.

For two days in Gainesville, Ravi, Khiyali and I had the opportunity to attend the Asha conference and absorb a sense of the prevailing concerns that volunteers felt regarding education.  For example, Anurag Behar, one of their speakers Saturday morning stated that “education is fundamentally a socio-political issue.”  What then would be the indicators of a good education?  Could we apply these indicators not only to individual students but to the social and political climate in which they pursued education?  Could we look also at the socio-political climate of the classroom itself – who questions, who answers, who listens, and who learns? Learning, in and out of school. Doodled by Khiyali during the Asha conference.

Along with the standard indicators assessed by instruments such as the ASER survey, whose results Aparna, a volunteer from Stanford, presented as part of a session on the current state of education and socio-economic inequality in India, what other indicators should we look for in a successful educational effort?  For example, I would want to find out: How often do students ask questions?  How often do students ask questions because they are curious about something, and want to know more about it, even if it is not directly related to the specific lesson?  Several students, educators and activists who have looked at classrooms with these questions in mind have found that from elementary school to college, across rich and poor, indicators were very low, often lowest among those who otherwise ranked highly in standard assessments. How often is the classroom set up in a way that what the students are expected to do is answer the questions and how often are they given time and space to question the answer, and even to question the question?   Even to reflect on the question, to ask, is this question even relevant, or is another more burning question in my mind?  Am I able to give voice to the questions in my mind?  Will anyone listen?  Or will they say, “don’t ask questions!”  At what point does a child learn that they are to answer and not ask questions?  What must we change in order to defend a child’s right to question, and with it, the right to learn?

Changing the dynamics of power in the classroom calls upon us to change the way we respond to people who have less power than us, not only in the classroom but in society at large, and in our own homes, starting from birth and extending to every level of education and governance.  We must examine, for example, what structures of power are upheld when we measure certain abilities and ignore others.

Without necessarily disputing that it is important to recognize letters and numbers, one can argue for indicators that are more meaningful for the cause of fulfilling one’s aspirations, individually and collectively. Without education in critical thinking, in recognizing social justice and injustice, and in speaking truth to power, how will we challenge this wholesale exploitation and destruction in the name of development?   in his keynote address on the first day of the conference, Ravi talked about some of these issues and the ways that AID has intervened through and integrated approach of sangharsh,nirman and seva.   I was given the opportunity to address the conference on the second day and picked up on these themes in my presentation.

How can we call for a paradigm of development that promises development for all?  Can we even believe that that is possible?  What kind of education can prepare us for a world that respects freedom, dignity and right to life and livelihood for all?  What kind of world will respect education that is based on the right to think freely and creatively, to question authority and engage with uncertainty?

I introduced some of my teachers – the communities and movements in different parts of India and described the kinds of issues on which people were struggling.  Some important lessons we learn from these communities concern the ways in which we are part of the problem.  I described efforts that we have made to recognize the ways in which we contribute to injustice and exploitation and to change our lives, including fair-trade and zero-waste initiatives, anti-dowry pledge, period of change campaign against menstrual untouchability and other practices of untouchability and caste.  I shared examples from a classroom discussion on caste and gender issues guided by a curriculum called called Sangati, developed by Avehi-Abacus, and implemented in the schools of the Bombay Municipal Corporation that is designed to raise awareness of these issues, help children understand their own experiences and articulate them.
Of course, unlike numbers and letters, social justice is not such a straightforward topic to teach or measure.  Nor is it easy to find teachers who recognize it.  Not being straightforward does not however mean it is less important or that we cannot get a sense of it.   It may well be more important, and more fundamental than literacy and numeracy and it may be that students already know quite a bit about it, though they may not know how to articulate it – or we may not know how to hear it.
The Sangati curriculum is designed with the aim of helping students make sense of their personal experiences at home and in their neighborhoods in a broader social, political and historical context.  The students I met had learned about Savitri bai Phule who worked for the cause of education for women and girls, and read stories raising caste issues such as Premchand’s Thakur ka Kuan (Thakur’s well) and Eklavya.
In their discussion we could see that while the material they discussed challenged social conventions and power structures, their ideas of how to challenge these in their own lives were yet forming and would take many more such discussions for them to articulate.
The politics of the classroom and the politics of their present reality layered upon one another, complicating the questions that the teacher asked based on the lesson.   It poignantly revealed how far the students were willing to go in challenging issues of caste and gender which we like to think are settled.
Coming back to the question of indicators, when someone “fails” to recognize caste or gender discrimination, we understand that the failing is not that of the individual alone, but a collective failure of the society that is founded on such discrimination.  What if someone recognizes injustice but refuses to challenge it?  Even if they are the ones suffering from the injustice?

The Asha conference provided an occasion to reflect upon the role of education in addressing such questions.