India’s Right to Information Act, 2005 is one of the more ambitious and powerful freedom of information laws in the world, providing accountability and transparency through public scrutiny. It provides an unprecedented power to the public to ask questions of their government at every level. Provisions for a monetary penal clause on public authorities for non-cooperation facilitates the implementation of the Act.

As Gopalkrishna Gandhi once said, the problem with the hard questions of social justice, accountability, and equality is not so much that they are unanswerable, as they are unasked. In a similar vein, knowing what to ask, and even knowing that one can ask, has turned out to be the primary hurdle towards effective implementation of RTIA.

It is widely accepted that typically, with any idea, the earliest adapters are children. Children are also a powerful force in spreading information and awareness in their local community. Given that notion, Asha Silicon Valley (Asha SV) in conjunction with Mountain Children’s Foundation (MCF) proposed that young persons in villages can be trained to use RTIA and also teach their parents and other adults in the village, and use RTIA to improve their communities, to discourage waste and corruption, and do it in a way that furthers interaction and cooperation between the government and the community.

MCF works with 30 partner NGOs in Uttarakhand, reaching out to over 13000 children in the mountains and nearly 700 village level groups. MCF connects children between partners and organizations, and helps represent their concerns to the government and other development forums. The children use this forum and work together at the grassroots to improve their communities and advocate their rights. MCF has historically been working on child rights and advocacy, education, gender equity, health and sanitation, and natural resource management in Uttarakhand. 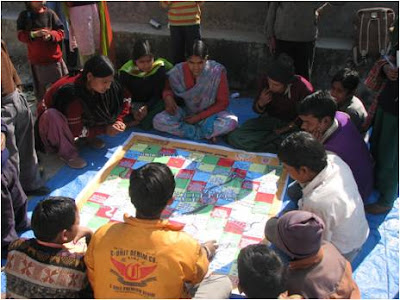 MCF and Asha SV jointly started the Right to Information project in Uttarakhand. Asha SV had been engaged with MCF since 2005 and after a year long discussion on how to include the newly passed RTI Act (2005), we came up with a proposal in 2007 to train children on the law, and have them use RTI as an effective tool in all their endeavors. Another aspect of working with children (which we did not anticipate when we started out) was that children were not bogged down by either fear or greed, and brought their unbridled enthusiasm to bear down on an unyielding govt. machinery. For eg., among all the NGOs MCF worked with, no adult had ever filed an RTI on any community issue. All RTIs filed by adults (such as they were) were on personal issues — where is my passport, where is my application now, why have I not received my land title holding, etc. Children however, filed RTI applications about anything and everything they saw in the community — how many teachers have been appointed to my school, why is this road only half-tarred, why are these pipes lying around next to the ditch,why is there no electricity, etc. 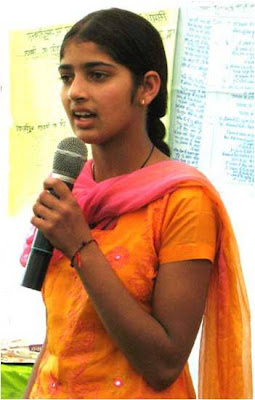 Also, the children we worked with were mostly teenagers, and anywhere between 2 to 5 years from becoming voting adults. This is a great way to create an educated, empowered, responsible, and confident electorate for the future (in keeping with the original reasoning behind the directive principle in our constitution on why free and compulsory education was necessary to have a meaningful universal adult franchise).

With these motivations, the program was launched. A state-level workshop kicked off the proceedings with the Chief Information Commissioner of Uttarakhand, R.S.Tolia, attending the meetings. Subsequently many capacity building workshops were held, and village-level workshops trained the children, a lot of awareness materials were generated and RTIs were filed. During the discussions that led to the program, Asha SV decided to not restrict the children in the scope of their RTIs (to education related ones etc.) and let the children be free to file on anything they think is important. At the start of the program a base-line survey was conducted in all villages. This was tallied against the end-line survey for the same questions, with dramatic results.

The program was an incredible success in ways beyond what had been imagined when we started it. By numbers, 21 partner NGOs were involved in 104 villages with nearly 4000 children filing nearly 500 RTI applications. The state Information Commission which was skeptical to start with, was impressed enough to fund and organize one more state-wide workshop. A very large number of success stories came by — electricity restored to villages,roads and bridges built, school constructions completed, computers delivered to schools,teachers showing up in schools, registration of birth certificate for a child with unknown parentage, water issue resolved in a village, and so on. NDTV ran an interview with the children during their final workshop with children confidently explaining what they did and what success they’d had. Much other press coverage was also received.

Of course, all was not easy and straightforward. There were many hurdles faced along the way. Children were intimidated, information was not provided in the format requested, money was demanded in exchange for giving the information, children were sent to different departments to apply for information, in some cases it was not clear who the Public Information Officer (PIO) was, government officers did not know about RTI or how it was implemented, to name a few. MCF and its partner organizations worked patiently through all issues, always supporting the children throughout, and trying to work with the government Information Commission and not coming across as anti-government. Of all the RTIs filed, about 15% were education related. Others were spread over a wide range of issues like playgrounds, electricity, water, roads, health, UBR, ration cards, sanitation, panchayat, BPL cards, pensions, forest, gender issues, irrigation, anganwadi, and child rights. 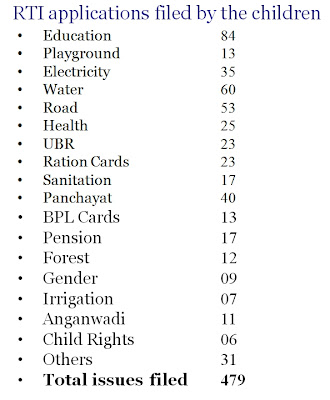 The success of the program inspired other organizations to try and replicate it locally. MCF has been involved with training folks on what they did, while stressing on how key it is to carefully customize the program to the geo-political-economic-social context of where it is being implemented. World Vision also funded MCF for an extra workshop. Going forward, the program is being extended to include more children and build on what was achieved in the past year and a half. One of the unquantified gains of the program was how confident the children were after seeing the kind of effect their actions were causing. If we can create such confident, aware, and socially sensitive children in our schools, the goal of education is met in its true sense.

One of the unique features of this project (as opposed to other RTI awareness projects) was the unexpected nature of the applicants. In the words of Asha Fellow Mahesh Pandey (he attended the final workshop, and visited the project in Uttarakhand)

In Uttarakhand, the way the children of “PABAM” (the Mountain Children’s Forum) have used RTI to change the face of their villages is truly worthy of praise and is an inspiration. Using this law, the children have sent the entire country a message that children, too, have an important role in changing this country’s rusted systems. I learned from attending [MCF’s 2 day RTI workshop] that if children begin to use this law then it won’t take very long before this country becomes free in the truest sense.